Why eCargo Bikes are in Everybody’s future

2020 is potentially the great leap forward. Prior to this year, the environment was looking bleak, and with not enough action from world leaders, It didn’t look like it would change anytime soon. Based on reports from Sustrans cycling clearly offered benefits for the environment, the economy and people’s health. However the UK lacks the infrastructure to accommodate safe cycling, it was by far and away the largest deterrent for the public. Local governments wouldn’t build the infrastructure as there weren’t enough cyclists, people wouldn’t cycle because there wasn’t any infrastructure.

Maybe our hand needed to be forced? Maybe we needed a global event to help show us there are different ways of living.

After the world went into lockdown, the world saw global reductions in emissions as travel and industry was halted. People had to adapt to a new way of living. Companies began to invest in remote working, and people began to see the benefits. the roads were quieter, the air was cleaner. There was more cycling and more walking.

Lockdown is now lifting, however, local authorities have seen the benefits of quiet roads. North Tyneside has now officially announced widespread road closures and restrictions along with key areas in the area. To make more space for cycling. And to help aid businesses get back up on their feet whilst still observing social distancing, allowing cafes more space for customers in the excess road.

With this new pedestrianized way of living there needs to be adjustments to accommodate these changes. Deliveries will prove more difficult with reduced space and increased restrictions with clean air zones. eCargo bikes allow companies to penetrate these areas without bending the rules. Larger vehicles can park outside of these zones, hand over deliveries to eCargo bikes which then make the final delivery.

eCargo bikes will prove a necessity in the coming years, which we are already seeing in European countries. But not just for businesses.

eCargo bikes offer the closest possible replacement for a car. Some may argue why not use electric cars? Electric cars still suffer from congestion, car parking and charging issues. Their batteries are damaging to produce and when the UK is still reliant on fossil fuels, considerably more damaging to charge than an electric bike.

Riese and Muller are one of the brands that we offer. They are all made and engineered in Germany. 80% of the energy used to produced to make their bikes is made on-site using solar. Riese and Muller have a global reputation for pioneering the electric bike and home use eCargo bikes.

The Riese and Muller Load offers the greatest ride experience of any eCargo bike on the market. With the latest Bosch cargo line motor, full suspension, and belt-driven it offers the closest possible replacement for a car. I’ll let this video speak for its self. What your life could look like with an eCargo bike. If an eCargo bike can work in Norway, it can work in the UK.

Thank you once again, 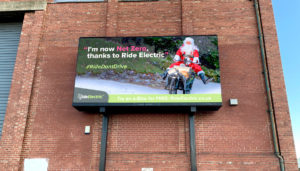